Once the Hybrid Energy Storage System (HESS) three-level architecture (module-string-system) and preliminary design were defined in the SEABAT project, we started the design and development of electrical, mechanical and thermal components of the HESS. Firstly, module-level components have been designed.

The most important electric components of the module are the battery pack, the DCDC converter, the BMS slave and the Module Controller (which controls the DCDC and has BMS master functionalities). The high energy (NMC REPT) and high power (LTO Toshiba) cells are already at IKERLAN where they are being characterized. 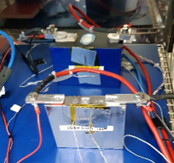 The Battery Management System (BMS) is being designed by IKERLAN. For battery monitoring and data processing the Master-Slave architecture has been selected. The designed modular BMS Slave is going to monitor the voltage of up to 18 cells, and temperatures of different points inside the module (up to 8). In addition, each BMS Slave holds dedicated balancing circuits to equalize the charge of all the cells in the battery. BMS Slaves are controlled by the BMS master. For high-power modules, 3 BMS slaves will be used and for high-energy modules 2 BMS slaves.

Finally, IKERLAN has been working on the design of the DCDC converter. The DCDC converter must support 120V and 184A. Thus, low-voltage high current semiconductors must be used. Silicon Mosfet has been chosen as the best cost-oriented solution. To achieve such a high current, with low-voltage devices, it is necessary to parallel four devices. Then, gate drivers and decoupling capacitors have been selected to finish the design. Figure 2 ( mid & right) shows the front and the back side of the PCB of the DCDC converter.

The design and development of the thermal management system components at the module level have been carried out by ABEE. Computational fluid dynamics (CFD), finite element methods (FEM), and 1D thermal-hydraulic simulations were used to improve the optimization methods. (figure 3)

Figure 3  – Results of CFD and FEM simulations of cooling plate

Figure 4 – Overview package with REPT cells and a long retainer

The design and development of the cell fixation and the housing are being done by FRAUNHOFER LBF. The mechanical architecture of a Lithium-Ion battery system was described and detailed in the first step. It is dived into two major parts. The first one presents a possible solution on the cell level and the second one on the housing and pack level. Every design solution has, not only from a mechanical point of view but also from the system point of view, its advantages and disadvantages and every design decision have an impact on other domains like thermal management.

The design approach is to use for the high power system and the high energy system even though the cells have different dimensions, as much as possible identical mechanical parts. Currently, based on the results of package studies, two different variants on cell fixation are in focus and are analysed in detail. Figure 4 shows the overview package with REPT cells and a long retainer.